“SEGREGATION IS LIKE HELL.
IT IS TOTAL ISOLATION.”
-Detained Immigrant at the Stewart Detention Center

“I HAVE BEEN AT THE DETENTION CENTER FOR
EIGHTEEN MONTHS AND I HAVE ASKED FOR NEW
SOCKS, UNDERWEAR, AND BLANKETS, BUT NOT
A SINGLE REQUEST HAS BEEN FULFILLED.”
-Detained Immigrant at the Irwin County Detention Center

“I TRAVELED TO AMERICA FOR ASYLUM, BUT I HAD
NO IDEA I WOULD BE DETAINED. I DIDN’T THINK
THEY WOULD DETAIN ASYLUM-SEEKERS. I JUST
ASKED TO APPLY FOR ASYLUM AND I DIDN’T KNOW
I WOULD BE IMPRISONED. . . BUT, I HAVE NO HOPE
OF ASYLUM NOW THAT I WAS TRANSFERRED TO
STEWART. STEWART IS JUST A DEPORTATION
CENTER. THIS IS NOT A PLACE WHERE YOU CAN
WIN ASYLUM.”
-Detained Immigrant at the Stewart Detention Center

“I AM IN SO MUCH PAIN. I DON’T UNDERSTAND
WHY THEY WILL NOT LET ME LEAVE.”
-Detained Immigrant at the Irwin County Detention Center 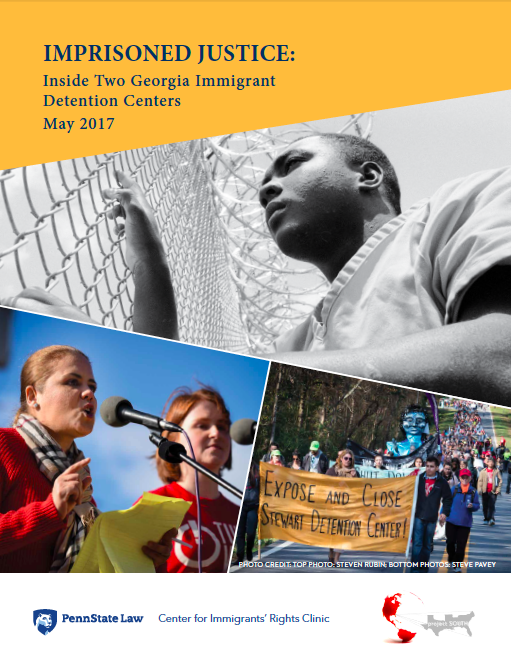 Atlanta, Georgia — Project South and the Penn State Law Center for Immigrants’ Rights Clinic today released a report titled “Imprisoned Justice: Inside Two Georgia Immigration Detention Centers.” The report is focused on the Stewart Detention Center and the Irwin County Detention Center and is based on interviews with scores of detained immigrants as well as immigration attorneys, tours of both facilities, and review of contracts and other relevant documents. The investigation was completed over the course of one year.

Stewart and Irwin had previously been identified in national reports as among the worst in the country.

“As the accounts in the report demonstrate, little has changed at Stewart and Irwin. Life at these facilities for detained immigrants is still a living nightmare,” said Azadeh Shahshahani. “It is high time for Stewart and Irwin to be shut down.”

As detailed in the report, the conditions in these detention facilities are deplorable and include: threats of force-feeding for participation in hunger strikes, sexual abuse, lack of clean drinking water, lack of adequate access to legal materials or attorneys, and labor for just $1 per day.

The use of solitary is also rampant. Several detained immigrants reported being put in segregation for expressing suicidal thoughts or as retaliation for complaining about detention conditions. As described by one detained immigrant at Stewart who suffers from mental health issues: “Segregation is like hell. It is total isolation.”

“This report provides a first-hand account of conditions at the Irwin and Stewart detention centers through interviews with detained immigrants and the attorneys who represent them. The living conditions in both detention centers raise significant legal and policy concerns.” said Shoba Sivaprasad Wadhia, founding director of the Center for Immigrants’ Rights at Penn State Law. “The remote locations of both facilities also mean that detainees are isolated from their families and lawyers,” said Wadhia.

These are the report’s overall recommendations:

• Shut down the Stewart and Irwin detention centers;
• ICE needs to implement policies that will hold contract facilities accountable for not complying with ICE standards;
• ICE should terminate contracts with facilities that do not meet its standards; and,
• ICE should use the Alternative to Detention Program for immigrants who are eligible.

The report was completed in collaboration with Alterna, Georgia Detention Watch, the Georgia Latino Alliance for Human Rights, and a special student project of Mercer Law School.

How the U.S. “Solved” the Central American Migrant Crisis