In one life, I put on my cap and gown and went to my NYU graduation in Washington Square Park at 10 a.m.
In the other, he put on the suit we were married in and went to his immigration interview at Federal Plaza at 10 a.m.
The night before, we still hadn’t chosen.
That morning, the cap and gown stayed in my closet and our lives changed forever.

We sat across from the ICE officer, holding hands. Our lawyer explained that we were filing to adjust his status based on our marriage.

“What kind of a name is that?” the officer laughed at the marriage certificate. “Why did you marry him?” he asked me.
“I love him.”
“Where have you been working?” he asked my husband.
“A restaurant.”
“That’s illegal.” After looking at photographs from our wedding day, he seemed to soften. “Okay, this shouldn’t be a problem. We’ll let you go and you’ll have to check in with us every month. Let me just OK it with my supervisor. Go outside and wait about 15 minutes.”

In the waiting room, I celebrated. Our lawyer gave me a stern look to stop.

When we went back into the room, five armed officers were waiting for us. “This is going to happen,” the original officer said. My husband was detained, and three months later, deported. 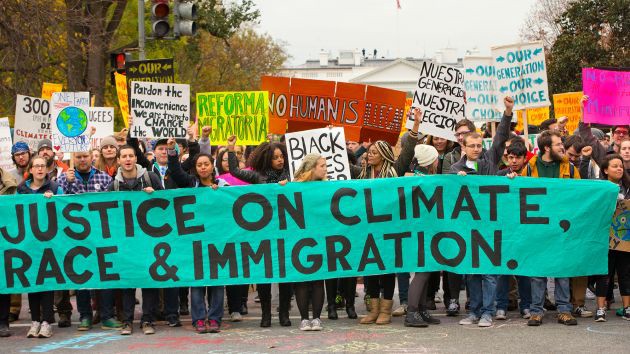 Ten years have passed and deceit is still ICE’s modus operandi. Under Trump, however, the lies seem to be piling up even faster.

ICE lies to extend its enforcement reach and to punish sanctuary locales.

“Infamously, ICE has used deceitful tactics in its operations for some time. During immigration raids conducted in Atlanta in early 2016, ICE agents deceived immigrant families by misrepresenting themselves as police officers searching for a criminal (who they depicted in a photo of an African-American man) according to a report by the Southern Poverty Law Center.

And just last month, ICE issued a document intending to shame local Sheriffs who didn’t comply with all ICE detainers. But that document was riddled with errors. Sheriffs across the political spectrum expressed outrage.”

Indeed, police departments also accuse ICE of lying. In February, the Santa Cruz police department cooperated with DHS in an operation against the MS-13 gang. But, as Police Chief Kevin Vogel later announced, DHS officials first promised the operation did not have an “immigration component,” but then “acted outside of the scope of this operation and had detained and removed a number of individuals from various locations based on their immigration status.”

“We can’t cooperate with a law enforcement agency we can’t trust,” Vogel said. 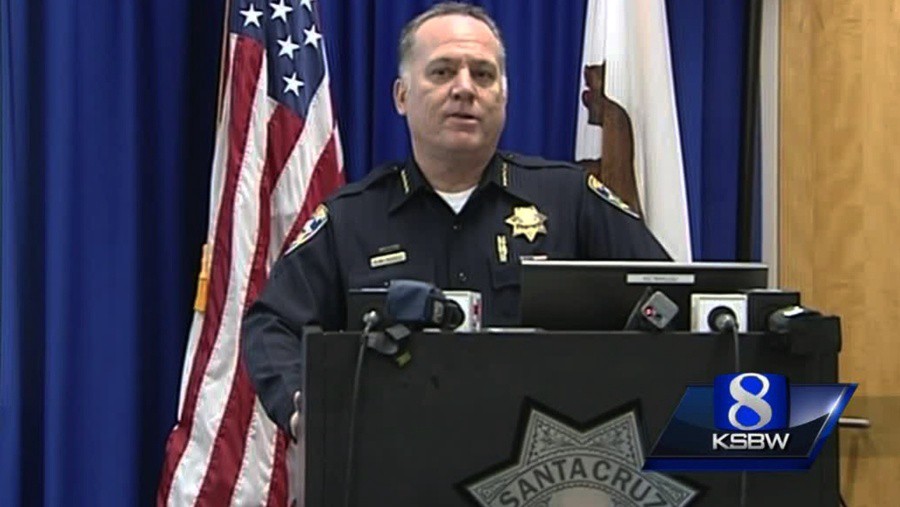 ICE lies to cover up its own mistakes.

Fabricating gang affiliations and criminal backgrounds is one of ICE’s favorite justifications for detaining people, including grandmothers, grandfathers, and Dreamers.

When Kapi appeared to his monthly check-in with ICE in September of 2016, he learned his ICE officer had failed to notify him that his stay of removal was denied back in May. The officer said he notified Kapi and his lawyer via fax, but admitted that he may not have. Kapi was detained on the spot and has been at the Theo Lacy Jail in Orange, California, ever since.

ICE lies so it doesn’t have to comply with human and civil rights standards in detention.

When ICE announced to the public in August of 2016 that families with children were detained for no more than twenty days, 22 women at the Berks Family Detention Center in Pennsylvania went on hunger strike. In an open letter to DHS Secretary Jeh Johnson, the mothers detailed their children’s suffering and thoughts of suicide. Then, their time in detention ranged from 60 to 365 days. Now, some of the same have surpassed 500 days in detention. 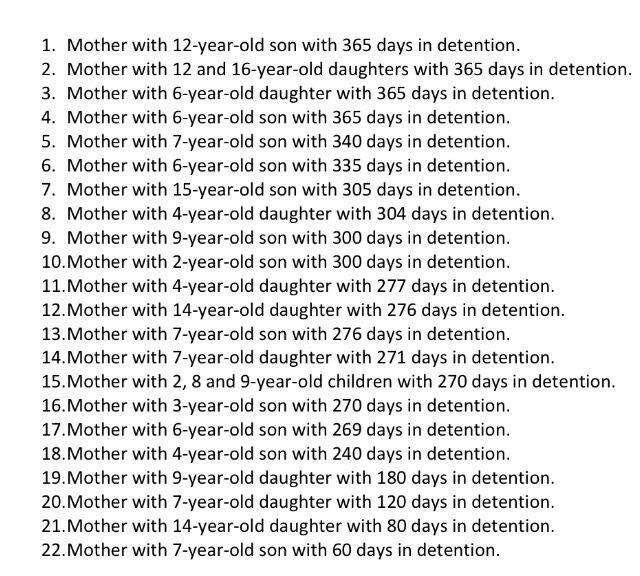 The 22 mothers who went on hunger strike at Berks in August, 2016. Photo credit: Juntos

A hunger strike at the Northwest Detention Center in Tacoma, Washington, has resumed and is now entering its fourth week after ICE lied and failed to comply with demands to improve facility conditions.

Meanwhile, people in detention’s complaints continue to go unheard while ICE continues to gaslight facts like a textbook abuser.

Daria was detained at the GEO Group-run Adelanto Detention Facility for almost a year in 2016, during which she faced abuse and retaliation. The first time she was assaulted, she asked to file a complaint with ICE and DHS in accordance with posted procedures. The guard threatened that filing a complaint would hurt her asylum case, so she decided not to, in fear. But she continued to speak out against ongoing mistreatment and medical neglect, and was even put in solitary confinement for 72 hours. She decided to begin filing complaints, one after the women were denied access to the recreation yard for five days.

A grievance coordinator visited Daria to deliver this response:

“I have investigated into your allegation and was told by several witnesses you were the person who yelled at the officer aggressively… This has been a pattern of your behavior. If you continue to file grievances with false information it could be considered abusing the grievance system and adverse action can be taken against you.”

From "Claims for GEO," an open letter from Daria and other women at the Adelanto Facility. Photo Credit: Tina Shull

In April, CIVIC filed a civil rights complaint on widespread sexual abuse in immigration detention. CIVIC’s data, obtained through Freedom of Information Act (FOIA) requests to DHS’s Office of the Inspector General, reveals that out of 1,106 sexual abuse complaints filed between May 2014 and July 2016, only 24, or 2.4%, were investigated. CIVIC also determined that more complaints were lodged against ICE than any other agency within DHS.

Watch Yordy describe his experience of abuse at the Otay Mesa Facility in San Diego.

What was DHS’s response?

“Unfortunately, the report just released by Community Initiatives for Visiting Immigrants in Confinement (CIVIC) regarding purported sexual abuse and sexual harassment at ICE and CBP facilities is grossly inaccurate… given the volume of individuals who annually pass through its detention system, the agency believes the overall incidence of such activity is very low.”

Trump’s agency VOICE has temporarily suspended its weekly lists of locales failing to comply with ICE detainer requests because their data was faulty.

But last Wednesday, VOICE launched a new hotline and a database meant to provide support and information for victims of crimes committed by immigrants. While everyone had a good laugh over the public seizing the hotline’s inadvertent launch on “Alien Day” as an opportunity to troll the hotline with UFO sightings, the hotline and ICE’s new VineLink database for immigration “offenders” are actually terrifying.

VINE (Victim Information and Notification Everyday) databases have been in existence in the criminal (in)justice system since 1994.

Watch this video on the history of VINE at your own risk.

Upon its launch, lawyers and advocates immediately discovered that VineLink contains the names of asylum seekers and children in detention.

Perhaps even more disturbing, to perform a search in this database users must register and confirm that they are “victims of a crime” or at least “concerned citizens” — automatically labeling whomever they are searching for a criminal. This parallels Trump’s immigration executive order which gives ICE discretion to detain individuals who they deem have committed an act which might “constitute” a crime. It’s all a fabrication.

And so ICE’s project of white supremacy continues. On Thursday, an Atlanta court found ICE guilty of “egregious” racial profiling and DHS lawyers of “willful misconduct” for looking the other way.

What was ICE’s response?

“We reject entirely the premise there was racial profiling,” ICE spokesperson Bryan Cox said. “We don’t do any random or indiscriminate enforcement.”

After a white man shot seven people of color, killing one African-American woman, at a pool party in San Diego on Sunday, Shaun King of the New York Daily News commented, “No hotlines are being created to report racist white men. No executive orders are being signed to protect people from the scourge of white supremacy.”

Do you have an #ICElies story? Share it here in the comments, or here.

An Open Letter to The Bullier In Chief, US President Donald Trump

May Day: Helping Migrants Across Borders