We were in quarantine from April 1st to April 20th… I did write to three news publications but it might not have made the news.
My comments on the fatality here are that if the staff knew about the man’s history, they should have monitored his physiology better.
I know first hand about the medical negligence here. I’ve been waiting for surgery for over a year, and I’m on the expedited list.

I am OK, considering being held in a “modern concentration camp.” I was informed last week that I will not receive my bi-weekly injections to treat my chronic medical condition. I was given a reason: that the medical department does not believe in the treatment.
There will be a time when it’s time to tell… [when] I will be more able to speak freely.
My health without medication is one concern. It leads to heart palpitations, muscle atrophy, and overall weakness. This alone should justify a release from detention.

New evidence has emerged of dangerously subpar medical care in US immigration detention at a time when the Trump administration is seeking to increase its use, Community Initiatives for Visiting Immigrants in Confinement (CIVIC), a group seeking to end immigration detention, and Human Rights Watch said in a report released on May 8, 2017: 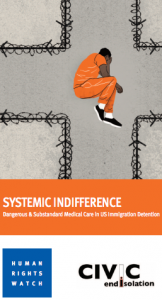 The report reveals systemic failures, such as unreasonable delays in care and unqualified medical staff, that are likely to expose a record number of people to dangerous conditions under President Donald Trump’s ramped-up deportation and detention plans.

“CIVIC receives more complaints on medical abuse and neglect across the country than on any other concern. In fact, in the last two years, over 37 percent of the complaints we have received are about medical neglect and abuse,” said Christina Fialho, an attorney and the co-executive director of CIVIC.

The report is based on independent medical experts’ analyses of records from US Immigration and Customs Enforcement’s own investigations into 18 deaths in detention from 2012 to 2015, and the medical records of 12 additional people from 10 privately and publicly operated facilities across the country. Human Rights Watch also interviewed more than 90 people who are or were detained, as well as family members, attorneys, immigration advocates, and correctional health experts.

The medical experts found numerous incidents of substandard and dangerous medical care, including failure to follow up on symptoms that required attention; medical personnel apparently practicing beyond the scope of their licenses and expertise; severely inadequate mental health care; the misuse of solitary confinement for people with mental health conditions; and sluggish emergency responses. The experts agreed that substandard care was evident in 16 out of 18 deaths, and subpar care contributed to the deaths of at least 7 of these individuals.

Dr. Marc Stern, a correctional health expert who reviewed all the documents in our report, concluded: “From the evidence that I saw in the cases that I reviewed, we have a system that is broken for detainee health care, and adding more detainees to that system can only make it worse.” 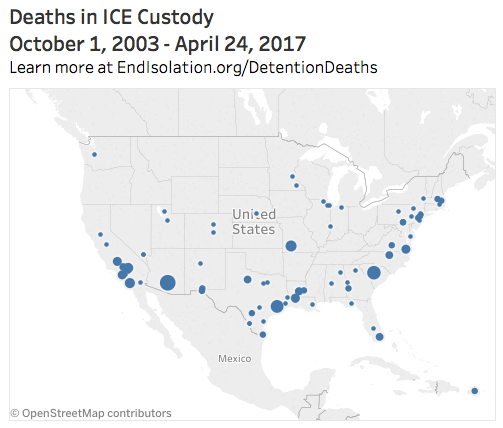 As CIVIC’s interactive map of 169 reported deaths in immigration detention reveals, more people are dying at the Eloy Detention Center in Arizona and the Houston Contract Detention Facility in Texas than any other facilities. Both facilities are operated by the private prison company, Corrections Corporation of America (CCA)/CoreCivic. In addition, 9 people in immigration detention have been transferred to the Columbia Care Center in South Carolina where they died. The Columbia Care Center is run by Correct Care Solutions, and it is the only private detention healthcare facility in the United States.

Correct Care Solutions also runs the medical care unit at various immigration detention facilities across the country, such as the Adelanto Detention Facility, where two people recently died within a span of 3 weeks in 2017.

Among the five people to die at the Adelanto Detention Facility since 2003 was Raul Ernesto Morales-Ramos. Mr. Morales-Ramos died after delayed surgery to remove an abdominal mass. Experts concluded he likely had symptoms of cancer at least two years before he died. These symptoms were not addressed until a month before he died.

Film credit: Human Rights Watch
CIVIC and Human Rights Watch found significant problems with medical care in both private and public facilities, underscoring that the problems with medical care are systemic. For example, Tiombe Carlos, detained at York County Prison in Pennsylvania, died of suicide after receiving “woefully inadequate mental health care.” Ms. Carlos also was placed in isolation for significant periods of time; the facility did not follow safeguards set by national detention standards. Henry P., who was interviewed for the report, was detained at Etowah County Detention Center in Alabama. He experienced a range of ailments and was eventually diagnosed with stomach cancer. On several occasions, his records reveal that medical staff responded to his complaint in writing without actually seeing him, or delayed responding to serious symptoms for weeks. Experts found that there may have been unreasonable delays in diagnosing his cancer, but his records are seriously incomplete.

“The sheer number and consistency of cases involving inadequate medical care point to a crisis that warrants immediate action,” said Fialho. “The medical experts’ analyses confirm what we have been hearing from detained immigrants for years. It’s past time to put an end to the substandard medical practices that harm many people in immigration detention each year.”

While CIVIC’s ultimate goal is to end immigration detention, we have a number of recommendations in the report that include specific ways to reform the monitoring system and the medical care contracting process as well as increase transparency of detention operations. For example, Congress can appoint an Independent Medical Oversight Board to be comprised of medical doctors and advocates at the national level and encourage ICE and its contractors to begin implementing local medical oversight boards at individual detention facilities.

Poor health care in immigrant detention centers may get worse under Trump On a blustery day in April, reporters file through the long echoing corridors of the Immigration and Customs…www.pri.org 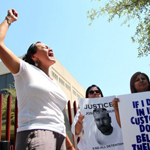 Report: Medical woes at US immigrant detention centres - BBC News When Jose de Jesus Deniz-Sahagun entered US Border Patrol custody in May 2015, he told agents that he thought Mexican…www.bbc.com

Witness: A Needless Death in US Immigration Detention When Tiombe Kimana Carlos committed suicide at 34, she had spent two-and-a-half years in immigration detention at York…www.hrw.com 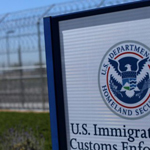 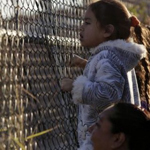 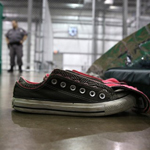 Immigrant Detainees May Be Dying Because Of Inadequate Care, Doctors Say For years, inmates in immigrant detention have accused Immigration and Customs Enforcement of failing to provide…www.huffingtonpost.com 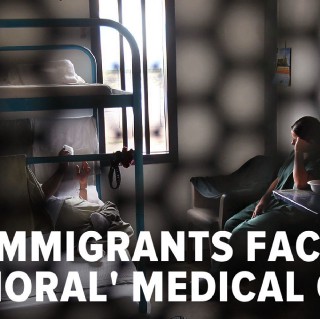 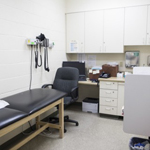 In Immigrant Jails, Health Care Can Be Hazardous To Prisoners' Health The United States runs the largest immigration detention system in the world and it's set to grow dramatically due to…www.fastcompany.com 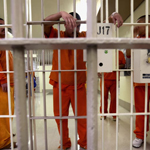 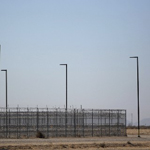 In Memory of Jean Carlos Jiménez-Joseph