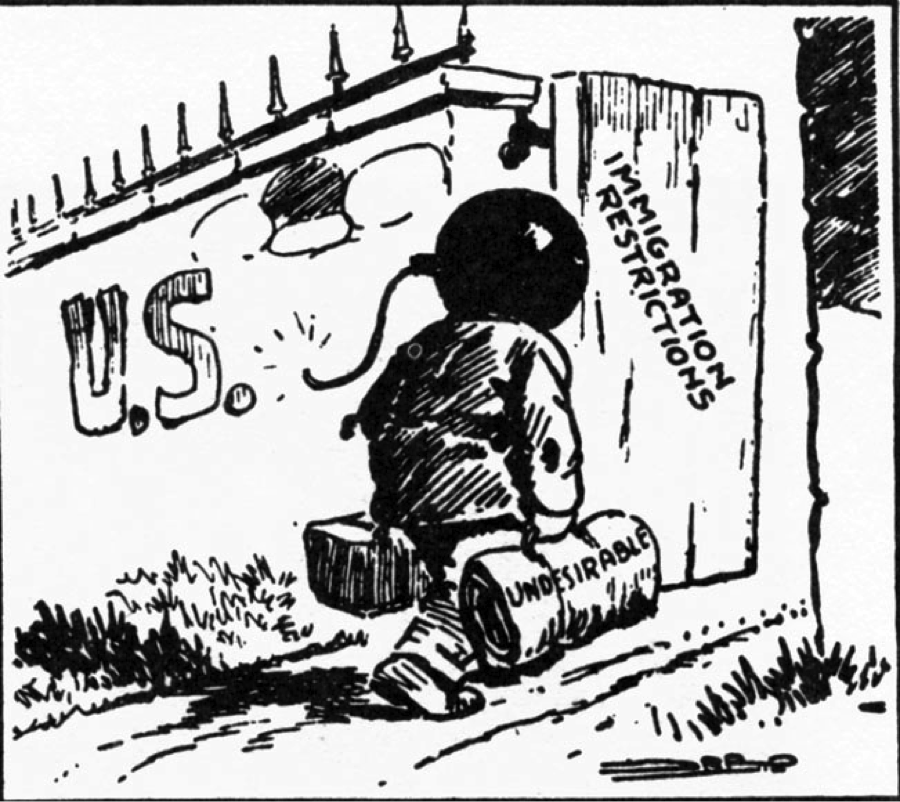 The mis-conception that immigration poses various threats to the United States is prevalent throughout U.S. history, as shown in this anti-immigration political cartoon from 1919. “Close the Gate,” Orr, Chicago Tribune, July, 1919.

CIVIC launched this column, “VOICE: Victims of ICE,” in direct response to the DHS’s creation of its new agency VOICE (Victims of Immigration Crime Engagement) in January and its announcement that it would begin publishing weekly lists of “crimes” committed by immigrants as part of Trump’s executive order ramping up immigration enforcement. After publishing lists for only three weeks, the Trump administration suspended publication of them due to inaccuracies and public criticism. Family members featured in Trump’s VOICE campaign have even since come forward, claiming to have been “used, abused, and exploited” by Trump.

Although the agency is not currently publishing its weekly lists, ICE is still disseminating skewed and false information in efforts to link immigration and crime in the public imagination, and in an attempt to justify its extreme policies of mass detention and deportation. Because of this, we will continue publishing “VOICE: Victims of ICE” to name ICE’s crimes and challenge Trump’s lies.

“The ICE officer told us we were being deported because we are drug dealers and gang members.”

“When we were sent back to Bangladesh, they told us we are all terrorists.”

Every war effort requires a propaganda machine, and Trump’s war on immigrants is no exception. His agency VOICE amounts to no more than an extension of ICE’s propaganda arm, drawing on our nation’s long history of anti-immigrant sentiment based on the false notion that immigrants pose a set of threats to the nation: economic, ideological, criminal, racial. Indeed, we often call America a “nation of immigrants,” but it is just as accurate to call it a nation of nativists.

A History of Hate

While scholars and immigration advocates may easily dismiss Trump’s exaggerated conflations of immigration and crime (and even have fun trolling VOICE’s hotline), we must take the power of these false narratives seriously. They flow from a long and influential but hidden history of hate that has for too long been considered fringe. Now, these forces have infiltrated the top levels of government.

VICE, the Southern Poverty Law Center, and others have traced and reported on the history of lobbying by anti-immigrant groups such as FAIR (Federation for American Immigration Reform) and the Center for Immigration Studies (CIS), as well as their extensive political ties. These groups, in existence since the 1970s and with well-documented ties to white nationalist hate groups, don’t just lobby but also specialize in producing false reporting on immigration that is then passed off as knowledge.

FAIR has had some influence over immigration policy-making over the years, especially during the Reagan administration, but now they have been given an unprecedented opportunity to shape policy under Trump.

Read: “Crossing the Line: Sheriffs Colluding with the Anti-Immigrant Movement,” a new report by the Center for New Community

Trump’s Attorney General and former Senator Jeff Sessions has taken a hard-line stance on immigration policy and is a long-time ally of FAIR, whose website champions him as a “true immigration reformer.” Sessions now oversees the Executive Office for Immigration Review, which includes all immigration courts. In April, Sessions delivered a speech to Customs and Border Patrol in Nogales, Arizona. The text of his prepared speech reads:

“We mean criminal organizations that turn cities and suburbs into warzones, that rape and kill innocent citizens and who profit by smuggling poison and other human beings across our borders… Depravity and violence are their calling cards, including brutal machete attacks and beheadings. It is here, on this sliver of land, where we first take our stand against this filth.”

Sessions omitted the last phrase, “against this filth,” from his speech, but the published version sparked outrage from advocates, who connected Sessions’ imagery to many similar instances throughout Trump’s campaign.

The takeaway here is the Trump administration’s continued and disproportionate focus on the tired and untrue “immigration-drug-crime” connection. This is where we must sharpen our focus and connect the dots between this decades-long mis-information campaign, ICE’s war on immigrants, and a new wave of public animosity — always bubbling under the nation’s surface but now boiling over. 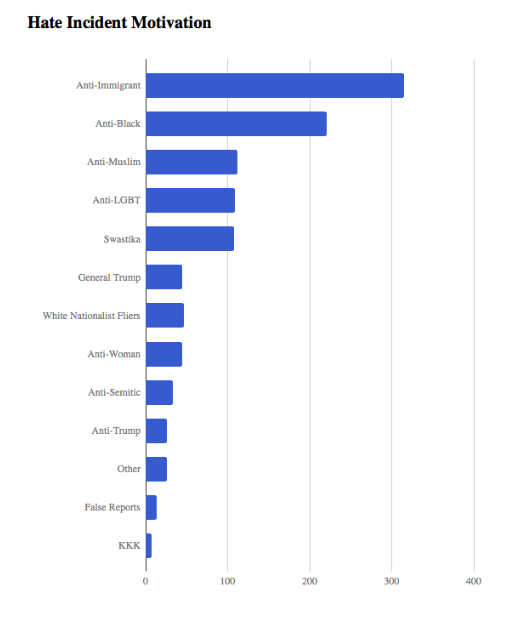 The Southern Poverty Law Center has been tracking a surge of hate-related incidents since Trump’s election, with the highest number of them being anti-immigrant in nature. Source: Hatewatch

If we take a closer look at ICE’s communications, we see how they reflect the Trump administration’s intent to further propagandize the false conflation between immigration and crime. “Repeat a lie often enough and it becomes the truth,” is a maxim often attributed to Nazi Propaganda Minister general Joseph Goebbels. But most official definitions of the term “propaganda” focus less on whether or not information being disseminated is a flat-out lie, and more on it being biased, incomplete, or misleading in service of a political end.

Undoubtedly, ICE lies, but even ICE’s communications that may be truthful reveal a selective and propagandistic pattern that create a false illusion of immigration threat that over time both reinforces public misperceptions about immigrants and justifies ICE’s existence.

Let’s look at some of ICE’s communications. 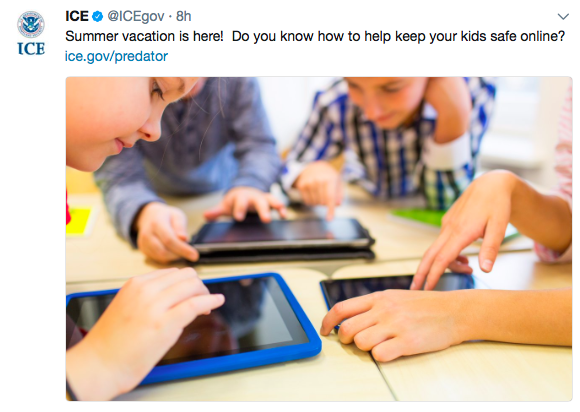 We will not post any comments or public responses here, but they are nasty. While they parrot decades or centuries-old misconceptions about immigrants, they also reflect a newly emboldened anti-immigrant sentiment in the age of Trump.

There is no criminal immigrant threat facing our nation. There is not, nor has there ever been, a positive correlation between immigration and crime, nor between Sanctuary cities and crime.

On July 12, Jeff Sessions gave a speech on law enforcement and Sanctuary cities in Las Vegas. He cited a University of California, Riverside, study to support his claim that cities with sanctuary policies have higher violent crime rates. Except he was wrong — the study proves the opposite.

The study’s authors were quick to call Sessions out for his failed attempt to co-opt their research and flip the script, and we all must continue to do so.

The majority of people targeted for enforcement and removal, who are being arrested and placed in immigration detention, are for low-level crimes. Many people in detention have no criminal record at all, and many are asylum seekers.

The Washington Post reported in April that ICE data shows that half of 675 immigrants arrested in raids after Trump’s inauguration had only traffic tickets or no record at all. An analysis of ICE detainer requests (requests to transfer someone from criminal to immigration custody), which Trump’s weekly VOICE lists tried, and failed, to selectively show otherwise, reveals the same trend — the five most common crimes in detainer requests are DUIs, traffic offenses, illegal entry, marijuana, and miscellaneous drug charges.

But ultimately, we miss the point and play along with Trump’s game when we argue over levels of criminality. Our entire immigration detention system was founded and operates on a set of lies, propagated by white supremacist groups who have made it into the mainstream. We must reject it fully.

Trump’s war on immigrants is an assault on truth. And we won’t stand for it.