To #AbolishICE, We Must Envision A World Without Immigration Detention. Here’s How.

"#AbolishICE" has become the new motto for activists, the public and even some lawmakers who are outraged at the Trump administration’s cruel policy of family separation at the border and the federal agency’s documented track record of terrorizing immigrant communities. But does this rallying cry go far enough?

As a Kenyan immigrant who was incarcerated for 9 years and 4 months — nearly a decade — in immigrant prisons and jails, it is important to me that the public understand that abolishing ICE means building a country without immigration detention.

And my organization, Freedom for Immigrants, has mapped out a concrete plan on how to do so.

Between 2005 and 2015, I was held in immigrant prisons and jails in California and Alabama. I was arrested by ICE just a few years after Congress established the agency through the Homeland Security Act of 2002. However, when I was in immigration detention in 2005, I met many men who had been arrested by ICE’s predecessor, the Immigration and Naturalization Service (INS), and thrown into immigration detention years before. Abolishing ICE means nothing if a new government agency with an equally harmful agenda of enforcing inhumane immigration laws can replace it. If there’s anything we’ve learned in this political climate, it is that history repeats itself.

We must go further than abolishing ICE. But we can’t do that without taking practical steps right now to dramatically decrease the use of detention to lock up immigrants and prevent a federal agency from operating unchecked.

The good news is that such proposed legislation already exists. It’s called the Detention Oversight Not Expansion (DONE) Act, and it was introduced by Sen. Kamala Harris and Rep. Pramila Jayapal with the support of Freedom for Immigrants. The measure not only freezes the growth and expansion of immigration detention nationwide, it also increases oversight and accountability. Most importantly, the bill would require the Department of Homeland Security to submit a plan to decrease the number of detention beds by 50 percent.

The bill would keep more families together by cutting in half our detention bed capacity through community-based alternatives to detention. Perhaps this is the most important and necessary step because it can allow us as a country to envision a future without immigration detention, one in which immigrants are treated with compassion.

Freedom for Immigrants has not only envisioned this world, we are building it.

The community-based alternatives to detention that we are building are run in a similar manner to the federal Refugee Resettlement Program. Instead of being detained, immigrants are allowed to remain living with family. If they are recent asylum seekers without family, then they are housed with volunteers or in group homes while the courts process their immigration cases. They are not only humane, but also significantly cheaper. And no, they don’t require the involvement of any immigration enforcement agency.

There are other solutions, too. Like eliminating the laws that criminalize migration and dismantling the 1996 measure that President Bill Clinton signed into law and that

“laid the groundwork for the heartbreak on our border today.”

That is what I am fighting for when I call for the abolition of this system. It means abolishing the incarceration of all immigrants and the laws that criminalize us for being immigrants. Abolitionist resistance draws from a legacy of Black- and Indigenous-led movements in the United States and around the world that fought for liberation against slave, colonial and neocolonial societies. Yes, the U.S. passed the 13th Amendment, which abolished slavery and involuntary servitude. But slavery and colonialism are still very much alive today in the form of our mass incarceration system, which privileges profit over people. This fight is not just about getting people out of these man-made cages. It is about eradicating these systems of oppression that, since this country’s founding and to this day, have irreparably harmed historically marginalized communities.

I first learned about community-based alternatives to detention when I met Freedom for Immigrants in 2013. One of the non-profit organization’s co-founders, Christina Mansfield, visited me when I was imprisoned in this supposed civil form of confinement at a county jail in Gadsden, Alabama. This is the same jail where detained individuals were subjected to physical abuse and other human rights violations while the Sheriff used more than $700,000 of jail food funds for his own personal gain.

Freedom for Immigrants immediately began advocating for my release.

On March 9, 2015, after almost 10 years, I walked out of a for-profit immigrant prison in San Diego, California. The organization’s support for me did not stop there. They picked me up from immigration detention, helped me find housing, and a job.

I am now a father and a husband, and the owner of Rafikiz Foodz in San Diego. I am still at risk for detention and deportation. But I have a community of support behind me, and I continue to speak out against the system.

When I was in immigration detention, I was separated from my family, including my mother who passed away without me by her side. I witnessed and filed complaints about lack of proper medical care and physical abuse by ICE agents in immigration detention. I lived through the slow deterioration and eventual death of a friend, Teka Gulema, whom ICE “released” on his deathbed at a nearby hospital so that the agency did not have to record his death in custody. And since my release, I have sued one of the corporations that imprisoned me, CCA/CoreCivic, which forced me to work in violation of the Trafficking Victims Protection Act.

On behalf of the over 40,000 immigrants incarcerated in the U.S. immigration detention system, we welcome you to this movement for our freedom. And we hope that you will fight with all of us to end the imprisonment of immigrants in our country. 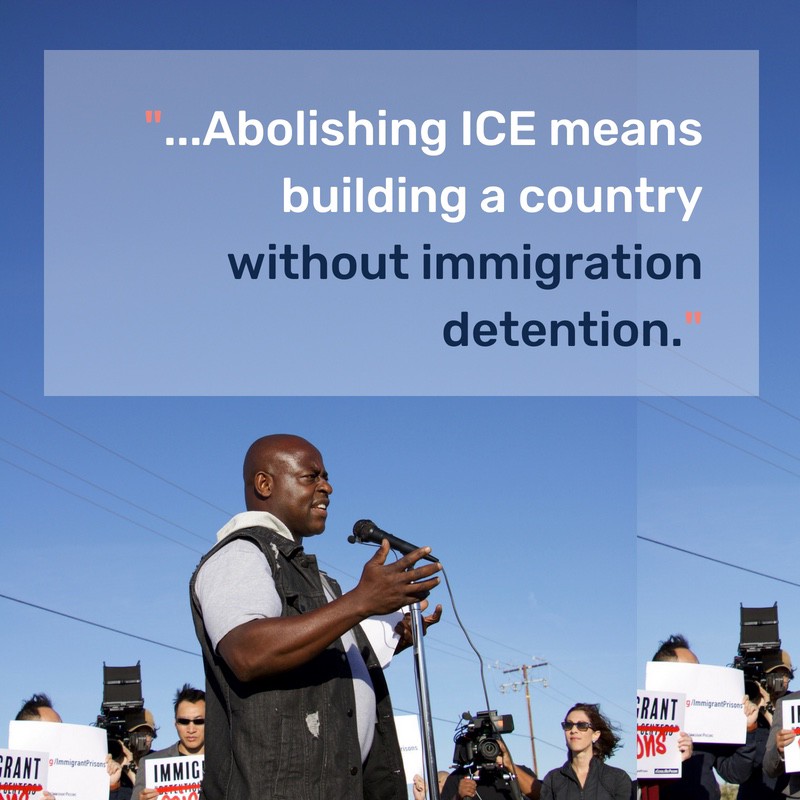 Sylvester Owino is a founding member of the Leadership Council of Freedom for Immigrants (formerly CIVIC) and the owner of Rafikiz Foodz in San Diego.

“We haven’t told our kids he’s in jail.”