I was born in a tucked away town called Malakal in South Sudan, on the west banks of the Nile. My mother was a school teacher who taught Arabic to primary school children and adults alike. She also worked as a lead coordinator of logistics for the United Nations and other Non-Governmental Organizations (NGOs). I was left in the care of my maternal grandparents and reared along with many uncles and cousins, some who were younger and others old enough to be my parents. I was never left to feel the void of having neither of my parents because of the warmth of their acceptance. My grandparents taught me my position in the family and how to relate to the world around me.

By the time I was five years old, my mother returned from her job to announce to the family that she will be taking me, her younger brother, and nephew to the land of milk and honey, a country we’ve only heard about in legends and folklore and never would have imagined one day reaching. And so began our tedious journey of reaching America on foot through the inhospitable terrains of Sudan, leading to the neighboring country of Kenya, where a United Nations refugee camp called Kakuma still existing to date was located. The journey was neither easy nor pleasant. We encountered many obstacles along the way, which made us ever more determined to reach our destination. Our travels to Kenya took us several months. We travelled by night, to avoid the ravenous wildlife and government troops that would encumber our journey, so getting caught was extremely detrimental to our cause.

Upon arriving in the capital city of Nairobi we were arrested by the police when we failed to produce valid travel documents. We were subsequently jailed for this offense and threatened with repatriation unless we paid a sum to the jailers that guarded our freedom and ultimately our destiny. Nevertheless, this form of extortion is the fate that many foreigners face upon arrival to Nairobi, Kenya, which the government of Kenya has made tremendous strides toward combatting. After release, we made contact with a distant uncle, who ultimately became the governor of Upper Nile States in South Sudan. He took us to a small apartment which he shared with his wife and small daughter, where we got sufficient rest and nourishment. 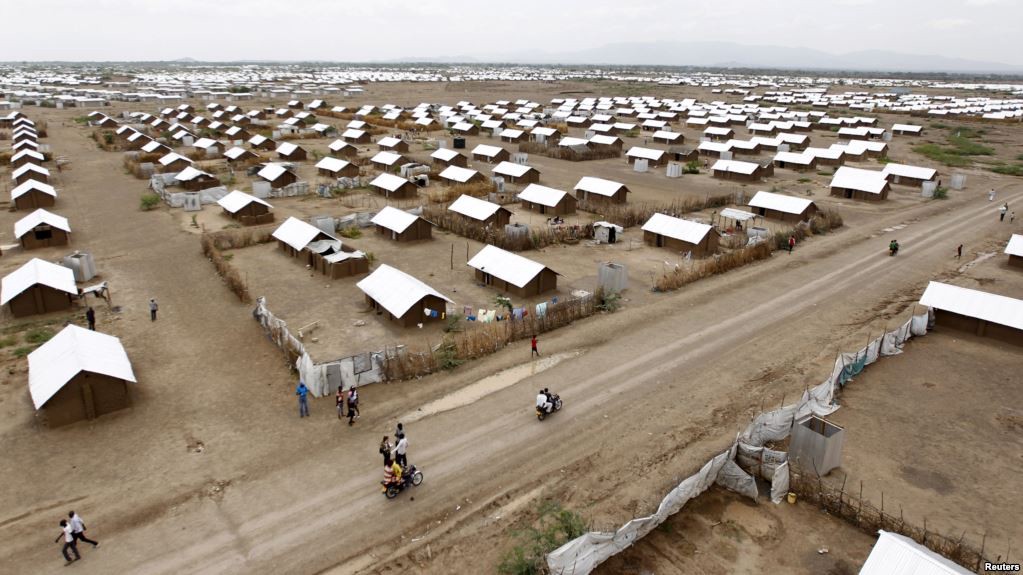 An aerial view of the Kakuma refugee camp in 2015

Arriving in Kenya was the inception of manifesting our dreams, to evading imminent death, destitution and of coming to America — a dream which we had come so far and yet not close to achieving. Our uncle informed us that the only way for us to get into the United States was to go to a refugee camp on the outskirts of the city and apply for asylum to the United States to be admitted as refugees. It was here in Kakuma camp where I met my father for the first time, a man whom I did not know, and had nothing in common with besides the gush of blood running through my veins and our genealogy. Unbeknownst to me, he had been settled in Kenya for many years attending a local university on a scholarship program for his excellence in academia. For two grueling years we lived the refugee life in Kakuma awaiting the anticipated results of our asylum application. In September of 1994 the results were in and posted on a wooden board outside the government building. The list of names included people who had been approved entry in the U.S. pending the results of a physical examination.

It was at this wooden board, surrounded by men, women, and children alike, literate or not, all gathered for the chance to see their name amongst the chosen few granted asylum. This dramatic chain of events brought mixed emotions: on one hand the static and stoked feeling brought by the anticipation of possibilities which awaits you oceans away, and the uncontrollable melancholy that consumed your heart for the others who do not share in your excitement. On September 13, 1994, our persistance, patience and sacrifice were finally rewarded when our airplane touched down in New York, as tears of joy flowed down our cheeks as we exchanged hugs and congratulations at the realization that what once started out as a dream has now become a reality. The story that began many years ago in a small village in Malakal has finally reached its climax. Outside the car’s window we stared fixedly at the tall buildings which compose New York City, and there in the distance, there she was, standing tall and proud, the beacon of liberty for immigrants, signaling our arrival to the new world with her hand held high, the Statue of Liberty.

Editor’s Note: Goaner has been in detention for over 9 months, most recently at the Freeborn County Adult Detention Center in Minnesota. He came to the U.S. at the age of 7, was initially apprehended by ICE in 2013, released, and then detained again in 2017. He has relatives living in the Midwest who are legal permanent residents.

I fought for my country — and got deported.