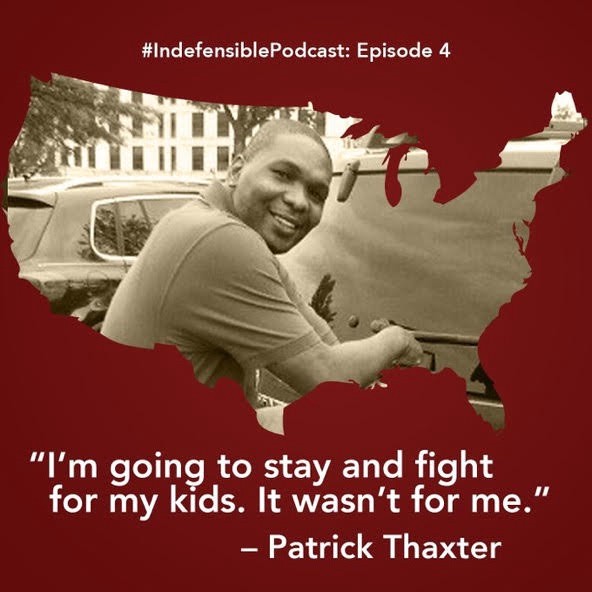 Patrick Thaxter is a former chef who now works quietly in the kitchen of a good friend in Germantown, Philadelphia. Originally from Jamaica, he traveled to the U.S. for a soccer tournament eighteen years ago. On that trip, he met an American woman at a Miami club and the two fell in love. After impressing her with his curry chicken recipe, as he recounts, the two got married; he obtained a greencard; and eventually, they had three daughters.

Later on, Patrick became head chef of Mango Bush, a popular Jamaican restaurant, where many customers once flocked for his curry chicken and stewed peas. Patrick’s life was suddenly shook up after his brother passed away. The restaurant closed down for a month while he took care of the funeral matters in Kingston, the brothers’ hometown. Now short on cash, Patrick accepted a friend’s risky offer for help — and ended up getting arrested for a marijuana offense in Philadelphia. Instead of prison time, however, Patrick was sentenced to probation, which was later reduced to two years.

ICE arrested Patrick at one of his probation visits. As a greencard holder, ICE could deport Patrick over this one and only conviction from years back. Like many immigrants with old convictions, Patrick feared he would be banned from the U.S. — from his daughters, his craft, and his community — for life.

A cruel double punishment that U.S. immigration law allows for and regularly imposes on non-citizens.

The Criminalization of Black Immigrants

“What happened to Patrick and his family happened not just because he’s an immigrant but also because he’s black and because he is working class,” says Carl Lipscombe of the Black Alliance for Just Immigration (BAJI), who co-authored the landmark study on Black migrants in the U.S.
Patrick’s story is emblematic of the particular struggles of Black people caught between our discriminatory criminal legal and immigration systems — from policing to punishment. It speaks to the ways in which multiple forms of injustice intersect to criminalize and funnel Black immigrants, in particular, into the detention and deportation machine. Like Patrick, roughly 7% of non-citizens in the U.S. are Black immigrants — and yet Black immigrants comprise 21% of those in deportation proceedings as a result of criminal convictions.

“Black immigrants like African Americans, live in communities that are over policed, heavily policed and thus they’re more likely to be arrested and then more likely to go through the criminal justice system. But offenses involving drugs are common in all communities,” Lipscombe says.

His fight to stay with his daughters, to continue working his craft, and living his life against the double punishment of deportation is powerful. And fits squarely within Black Philadelphians’ long history of resistance to police violenceand oppression. For immigrants of color who have been impacted by the criminal legal system, Patrick’s words resonate, “I was fighting my case before Trump came into office and I’m still fighting my case. I’m gonna fight. That’s all.”

Listen to Episode 4 of “Indefensible,” and subscribe to the series:

*Indefensible is a podcast series brought to you by the Immigrant Defense Project. Over five episodes, producer Will Coley will bring you stories from people who are standing up and holding out; fighting to be with their families. They say they’re here to stay. For a broader understanding of Indefensible’s goals, read IDP’s *companion piece.

Subscribe now on iTunes, Stitcher, Google Play, SoundCloud or wherever you get your podcasts. New episodes will be released every Thursday from May 25th through June 29nd. Indefensible is made possible by support from the Four Freedoms Fund.

Exposed: The Injustice of Immigration Detention