Immigration Detention in the Media: The Problem with the “Victim Narrative”

An op-ed by CIVIC’s Christina Fialho and Christina Mansfield

Our culture loves a story with a good victim narrative. And U.S. immigration detention seems to be filled with them. News stories abound with images of immigrant women, hands stretched out, as they are ripped from their children. Well-meaning journalists and advocates alike who are trying to achieve maximum sympathy from the audience dramatize the pain and suffering of people in immigration detention to promote reform or abolition.

The problem is: this victim narrative is not helping us win the fight to abolish immigration detention.

If all we see are images of people in immigration detention who suffer, how can we imagine a country where immigrants thrive outside of detention? If all we read are stories of desperate people with little to no agency of their own, how can we expect our culture to embrace a radical shift in immigration policy led by immigrants themselves? The victim narrative leaves no room for moments of resilience and strength, which are essential ingredients in any struggle to dismantle a system. In this way, the victim narrative perpetuates a story that is self-defeating.

In a sense, the victim narrative re-detains immigrants, this time into a worldview that says victims — and only victims — are deserving of empathy.

The Dutch sociologist Jan van Dijk explains that “victims” lose the empathy of others when they act “in an un-victim-like way by not exhibiting the passive behaviour deemed normal for victims.” It’s easier to tell immigrant stories through a victim narrative because it allows the storyteller and the audience to continue to think of immigrants as the “other” or the “good” victim. The storyteller gets to decide how to portray what immigrants think or feel. The storyteller remains in power, censuring the humanity of their subjects. 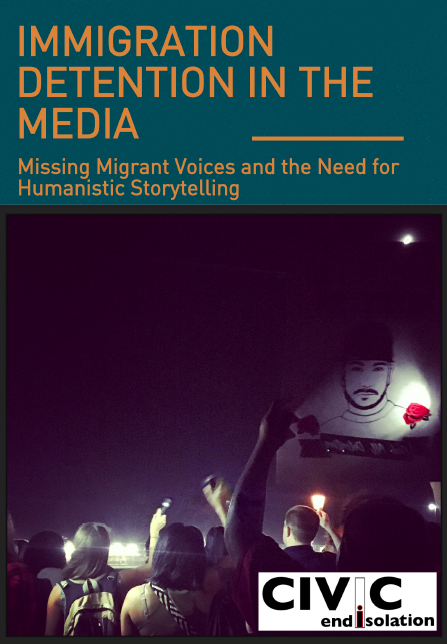 Click on the image to read “Immigration Detention in the Media,” a report by CIVIC

But the narrative remains the same.

Rather than reflecting and representing a nuanced understanding of what it means to survive in immigration detention, most news articles present a one-dimensional view of immigrants as passive individuals devoid of the capacity to thrive.

We’ve all heard it before: a good story needs a victim deserving of our compassion. But a good story also needs a hero. For us, those heroes are the people in immigration detention, those who have suffered through this horror and their families. They have been victimized by our government, but they have not allowed this victimhood to define them.

For example, it was heroes held in the privately-run Adelanto Detention Facility who used their bodies as a form of protest in a 300-person hunger strike that led to the introduction of the Dignity Not Detention Act. This month, California Governor Jerry Brown is deciding whether to sign this bill, which will end for-profit immigration detention contracting in a state that incarcerates a quarter of the federal immigration detention population each year.

When we refocus the narrative in this way, advocates are required to change their relationship to those in immigration detention. There is no longer a place in this story for advocates at the center as the hero or the savior. For advocates, our place becomes that of an accomplice to the hero — the Robin to the Batman, if you will.

This opinion piece was co-authored by Christina Fialho and Christina Mansfield. Fialho is an attorney, and Mansfield is a cultural anthropologist. They are co-founders/executive directors of Community Initiatives for Visiting Immigrants in Confinement (CIVIC).

Urgent! Days Away from Deportation Without Your Help

The work of many generations